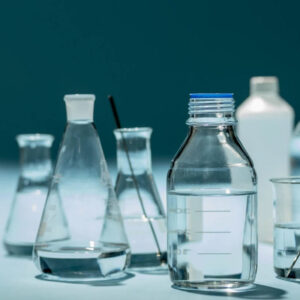 Ethyl alcohol, also known as Ethanol, grain alcohol, or alcohol, a member of a class of organic compounds that are given the general name alcohols; its molecular formula is C2H5OH. Ethyl alcohol is an important industrial chemical.  It is used as a solvent, in the synthesis of other organic chemicals, and as an additive to automotive gasoline (forming a mixture known as a gasohol). Ethyl alcohol is also the intoxicating ingredient of many alcoholic beverages such as distilled spirits, wine and beer.

There are two main processes for the manufacture of ethanol: the fermentation of carbohydrates (the method used for alcoholic beverages) and the hydration of ethylene. Fermentation involves the transformation of carbohydrates to ethanol by growing yeast cells. The chief raw materials fermented for the production of industrial alcohol are sugar crops such as beets and sugar cane, and grain crops such as corn (maize). Hydration of ethylene is achieved by passing a mixture of ethylene and a large excess of steam at high temperature and pressure over an acidic catalyst.

Ethanol produced either by synthesis or by fermentation is obtained as a dilute aqueous solution and must be concentrated by fractional distillation. Direct distillation can yield at best the constant boiling point mixture containing 95.6 percent by weight of ethanol. Dehydration of the constant-boiling-point mixture yields anhydrous, or absolute, alcohol. Ethanol intended for industrial use is usually denatured (rendered unfit to drink), typically with methanol, kerosene, or benzene.

Pure ethanol is a colorless flammable liquid (boiling point 78.5 °C [173.3 °F]) with an agreeable ethereal odor and a burning taste. Ethanol is toxic, affecting the central nervous system. Moderate amounts relax the muscles and produce an apparent stimulating effect by depressing the inhibitory activities of the brain, but larger amounts impair coordination and judgment, finally producing coma and death. It is an addictive drug for some persons, leading to the disease alcoholism.

Ethanol is converted in the body first to acetaldehyde and then to carbon dioxide and water, at the rate of about half a fluid ounce, or 15 ml, per hour; this quantity corresponds to a dietary intake of about 100 calories.

Why work with Sasma?

We are able to supply the highest quality and do so consistently. Our ethyl alcohol is available in various forms that each comply with different major pharmacopeia standards of the world.

Besides adhering to strict quality standards, we can also filter pure ethanol according to special micronfilter requirements on demand.

Production of pharmaceuticals.
Solvent for laboratory use.
Production of disinfectants.
Cleaning of surfaces.